David Bohm’s tiny treatise will transform your thoughts on the purpose, potential, and impacts of dialogue.

Why should you read on dialogue? Well it’s not everyday as a facilitator you can read something applicable to your work and interests that was written by one of the leading theoretical physicists of the 20th century. Also because there is literally a style of engagement named after this guy, Bohm Dialogues are a thing (wikipedia says so). Also fun (or not so fun fact) was that some David Bohm’s work was commandeered for the Manhattan project.

Anyways. Read this book because Bohm says things about the seemingly simple act(ivity) of dialogue that will transform how you view it. That will expand your understanding of when and why to engage in dialogue, the possibilities it holds, and the way dialogue can and might just change the nature of how we relate to each other.

Bohm defines dialogue as a group of people engaging with each other in conversation without a set goal or agenda for the conversation.

“In the dialogue group we are not going to decide what to do about anything. This is crucial. Otherwise we are not free. We must have an empty space where we are not obliged to do anything, nor come to any conclusions, nor to say or not say anything. It’s open and free. (p. 19)

This is because when we have a goal in mind, we limit our assumptions of what we should be talking about and that limitation restricts the possible directions and flow of the conversation. Many of us make space for dialogues in our workshops and trainings. We want to bring out differences of opinion, personal ideas, share insights, and challenge each other—dialogue is good for all of that. However, after reading Bohm, I saw dialogue as a tool for so much more. Bohm challenges us to consider dialogue as a space not only to share our thoughts but to suspend them (thoughts, ideas, beliefs, biases, prejudices) so the group can examine them from a new angle. Rather than just trying to not have these things (to be neutral) Bohm actively invites them to be suspended in space to learn more about them.

…suspend those assumptions, so that you neither carry them out, nor suppress them. You don’t believe them, nor do you disbelieve them; you don’t judge them as good or bad…You may also think of it as suspended in front of you so that you can look at it — sort of reflected back as if you were in front of a mirror. In this way I can see things that I wouldn’t have seen if I had simply carried out [that assumption.] (p. 23)

This new task for the group, of suspending assumptions and examining them, can create new opportunities for connection. For empathy. For understanding. Just a few of the things we facilitators are often interested in.

Favorite Thing about this Book

Just how much it changed my thinking on everything. This book refocused my attention on what is it that is causing friction between people and what are some innovative ways to approach creating more harmony. Just about every page had something worth noting. The book is small (<115 pages from introduction to index) and packs a punch. My brain hurt after certain pages, but it was the kind of pain where I knew cogs were turning and assumptions moving around. I recommend focusing on the first half (i.e. first 54 pages); that’s where I found the most useful (and transformational) knowledge for my facilitation toolbox. The second half gets into the nature of thought which, while interesting, made my head spin a bit.

In such a dialogue, when one person says something, the other person does not generally respond with exactly the same meaning that seen by the first person. Rather, the meanings are only similar not identical. Thus, when the second person replies, the first person sees a difference between what he meant to say and what the other person understood. On considering this difference, he may then be able to see something new, which is relevant both to his own views and to those of the other person. And so it can go back and forth, with the continual emergence of a new content that is common to both participants. (pg. 3)

The object of a dialogue is not to analyze things, or to win an argument, or to exchange opinions. Rather, it is to suspend your opinions and look at the opinions — to listen to everyone’s opinions, to suspend them and see what all that means. (pg. 30)

I recommend this book for: 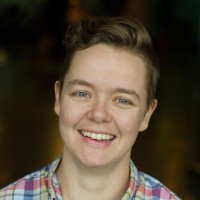 I'm a co-facilitators of FacilitatingXYZ and a co-author Unlocking the Magic of Facilitation. I'm a social justice facilitator and educator working towards creating a more beautiful world.